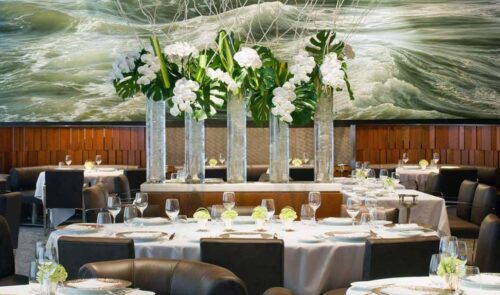 New York, United States, November 28, 2022 / TRAVELINDEX / Le Bernardin was named the number one restaurant in the world by La Liste, the global restaurant guide and ranking system of the world’s top 1,000 restaurants.

• Discover the World’s Best Restaurants for Fine Dining at TOP25Restaurants.com

The top ranking, which Le Bernardin shares with Paris’ Restaurant Guy Savoy and Frantzén of Stockholm, comes on the heels of the New York seafood temple’s 50th anniversary this fall.

Le Bernardin is the only New York City restaurant among the top 10, and one of 101 United States restaurants, including San Francisco’s Atelier Crenn, Addison in San Diego and New York’s Atomix, featured throughout the entire list.

“To see our team’s dedication recognized by La Liste is incredibly rewarding,” said chef and co-owner, Eric Ripert. “It pushes us to keep striving for excellence everyday, even 50 years in.”

This is the sixth consecutive year La Liste has named Le Bernardin the number one restaurant in the U.S., and the third time it has placed it at the top spot globally. Le Bernardin continues to hold three stars from the Michelin Guide and a four-star rating from The New York Times, which it has maintained across each of its five reviews since opening in New York in 1986. Le Bernardin is also ranked number 44 on the World’s 50 Best Restaurants List.

La Liste debuted in Paris in 2015, providing an objective and democratic ranking of the world’s most outstanding restaurants powered by a proprietary algorithm that gathers information from hundreds of reviews from such global publications as The New York Times, Michelin Guide and TripAdvisor, and thousands of consumer ratings from all over the world.

• Discover the World’s Best Restaurants for Fine Dining at TOP25Restaurants.com

About Le Bernardin
A fine dining icon for 50 years, Le Bernardin is the internationally acclaimed seafood restaurant from chef Eric Ripert and co-owner Maguy Le Coze. Opened in 1986 in New York by Maguy and her brother Gilbert after the siblings helmed its beloved Paris location for 14 years, the restaurant has held three Michelin stars since the guide’s 2005 New York launch, five consecutive four-star reviews from The New York Times, and is currently ranked number 44 on World’s 50 Best Restaurants list, a testament to its timeless appeal.