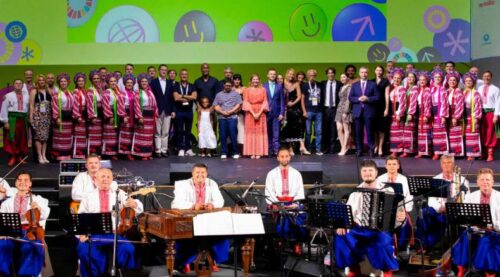 Drawing the landmark event to a close, UNWTO Secretary-General Zurab Pololikashvili joined UNWTO Director for Europe, Alessandra Priante, in thanking the 130 young delegates for their active participation. Valeria Mazza, UNWTO Ambassador for Responsible Tourism and the ‘godmother of GYTS’, also urged the participants, who came from 57 countries, to “follow their own paths in life” and to serve as advocates for tourism themselves as they return to their home communities.

Following this the Ukrainian National Folk Ensemble “Veryovka”, directed by maestro Carlo Ponti Jr, performed for an audience of high-level guests including the Ambassador of Ukraine to Italy, Mr Yaroslav Melnyk, the UN’s envoy for youth, Jayathma Wickramanayake, UNWTO Ambassador for Sustainable Tourism, Didier Drogba, Minister of Tourism of the Maldives, Abdulla Mausoom, and founder of the Small World Foundation, Ms Salam Hamzeh Ghaith. Participating through special messages to the young protagonists were Giorgio Armani – himself a UNWTO Special Ambassador for Responsible Tourism – and Sophia Loren, whose son, Carlo Ponti, led the musical celebrations.

Finally, in an act of solidarity, the night ended with presentations to organizations which are performing goodwill and charitable work, namely the Los Angeles Virtuosi, the MSC Foundation, Didier Drogba Foundation, Pokrova Association, and finally the UEFA Foundation.